Sad news. On May 2, 2013 we lost our Dad after a prolonged fight with alzheimers. He was in the Otterbein nursing home by the airport. His desire was to be buried down home in Manchester, Kentucky with his family. The Cincinnati area has lost one of the best mechanics ever. Mark :( 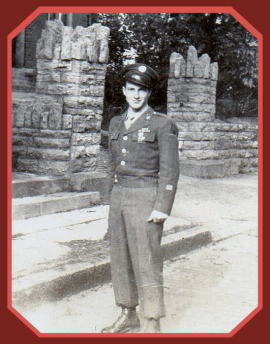 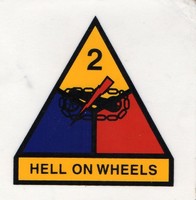 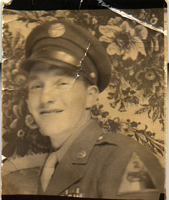 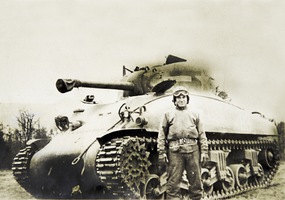 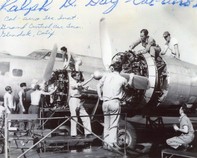 I really have to start at the beginning with my Dad for you to understand what we called "The Port". So here it goes. My Dad was the bow gunner and assistant driver in a sherman tank at D-Day. D+3 to be exact. If you've seen Band of Brothers when the 101st were pinned down at Carrentan and the 2nd armored came to their rescue, he was in one of those tanks. When I was a kid working down at the port, I would sit at lunch and sometimes if it was with the right person (usually another vet, I would catch a small glimpse of how bad it really was for the guys in combat. One story was of an airbattle going on over their heads one day and he popped his head out of his hatch an looked back at his armored column following a road along a hedgerow when a British Spitfire came over the hedgerow trying to make the field and instead ran right into the side of one of the Shermans in line killing everyone. He said if it was'nt for the tank that guy would have made it. Or in the apple orchards at night when his sherman knocked out two tiger tanks with one shot. apparently the tigers were driving pretty close together and literally ran head on into his tank which fired and hit the first tank, bounced off and struck the second. he said it did'nt really knock them out but both tank crews exited their tanks and ran thinking they had really been hit. One more was when there was some kind of barrage at night and people were running everywhere, he was running up a road next to another guy when he noticed that it was a German soldier running for cover also. He said that they both just ran in oppisite directions once they both figured it out. I tell these stories because one they should be told and two my dad almost decided to become a doctor instead of an aircraft mechanic. He did tell us about a hammer he kept by his side while inside the tank. apparently there is a hatch in the floor of the Sherman that he practiced getting out of really quick. 3 seconds was all the time you had to get out once you were hit. suffice to say he was the only one to survive out of 4 tanks and was in his fifth tank when he was shot in the leg while outside of it by a sniper. I am just glad the sniper miscalculated or I wouldn't be telling any of this.  Anyways, after convalesing in Frankfort, Ky. he came up to Cincinnati and was sitting on a park bench one day trying to figure out what he wanted to do. His cousin Dr. T.C. Mc Daniel, was trying to get him to use the Gi bill to become a doctor. While sitting on the bench contemplating, an airplane flew over and he said he always was envoyous of the guys up there flying free while he was buttoned up in his tin can. (I'll bet those guys up there sometimes wished they were safely buttoned up in an armored vehicle!) He decided to enroll in Cal Aero Tech. in California and the aviation career was begun. Thats him on top of the outboard engine in the picture above. I think we've still got that screwdriver around here somewhere. I do still have his huge note book where everything they taught was written down in his hand. If you ever stop by ask and you can check it out.

This is one of the earliest pics that I have of My Dad and brothers Gary & Greg at Blue Ash. White shoes in a maintenance shop! Oh yeah, That is my dads tool box behind which has to be one of the oldest snap-on boxes, angle iron sides and all. I asked the snap-on guy if it was still guaranteed for life. He just laughed. 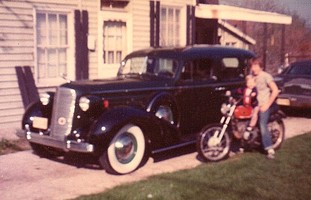 My Dad built this 1936 Cadillac Limo in the back of the hangar at Blue Ash. It was one of the most beautiful cars you've ever seen. This picture doesn't do it justice.

This is a picture of one of the mechanics who used to work at BAAS. Her name was Melissa Smith. She was on her way to GE and wanted to get some hands on experience working on small aircraft and since my dad was an equal opportuniy employer! Anyways that was his Harley at the time. He and his friends were coming back into town after a long vacation ride and unknowingly crossed the Ohio river right when the WEBN fireworks were letting out. A 21 year old drunk kid driving a Coors beer truck plowed into the back of him and destroyed the bike. My dad had alot of scrapes, bumps, and bruises but was ok otherwise. At the time Johnny Bench was the owner of the beer distributer and when they delivered his brand new replacement bike, there was a little placard that said "Compliments of Johnny Bench and Coors brewery. On the new bike my dad took all the chrome pieces and had them goldplated. I will have to find a picture and post. 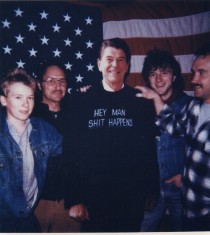 Thats My brother Phil, my dad, President Reagan, myself and brother Greg outside of boothill saloon in Daytona during bikeweek. The president was a blast. 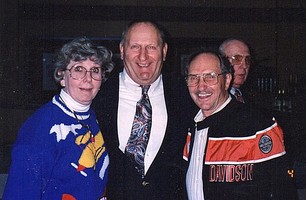 This is a picture from My dads 70th birthday a party. This is Anne Burdorf, Moose and my dad. That is Roger Burdorf behind my dad. Long time friends Moose ran Co-op aircraft service and Roger is an original Neutron. Mrs. Burdorf, Moose, and my dad all shared the same birthdate of April 4.