Various photos of airplanes and people at Blue Ash in no particular order. This is a work in progress so if I have missed someone it's because I haven't gotten through all of my photos yet. If any of you have a neat photo of anything from Blue Ash, please e-mail me a pic or stop by and I'll scan it. I need to thank Don Theis for alot of these pictures. Any pic from Don has a D.T. behind it. Thanks Don!

Sgt. Matt Maupin. During one of the airshows down at Blue Ash I got to meet his mom and dad. I have 3 boys of my own and can't even begin to imagine the pain. I have this picture hanging right in front of my desk. Every now and then when things get hectic and I want to complain, I look at this picture and realize I really have zero problems. Thanks to guys like this and all of our vets we can sleep tight tonight. Truly the backbone of our nation. 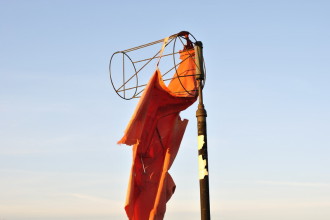 Don took alot of pictures of the demolition of the old hangars. I love this picture and think it really symbolizes the end of Blue Ash Airport more than any of the others. What a shame. If you stop by I-68 I will tell you how I really feel about the politicians involved. How's that streetcar workin out for ya. 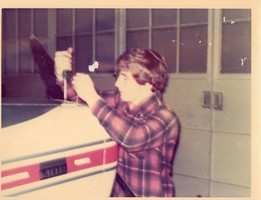 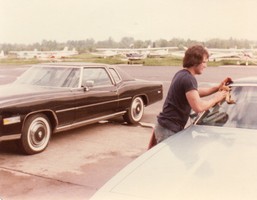 No thats not Sylvester Stallone, thats my brother Greg. 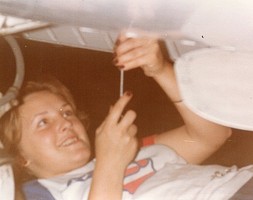 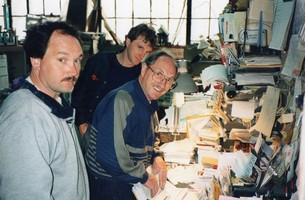 WEBN once had a contest for the messiest desk. We almost sent in a pic of our dads desk. I think we would have won. 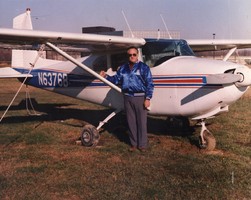 Bob worked at GE in heat treat. After he retired he became a regular airport bum. He would come up every day and go to lunch. One morning I jumped on the Lektro tug and swung around in the hangar and the back brace corner hit the nose of the 421. From then on when I would see Bob he would put his finger on the tip of his nose and push it over reminding me of my bonehead move. Bob and I would also argue over what was more important, sitting at the desk running the business or actually turning wrenches. Well Bob, you were right, there sure is alot of paperwork sitting on my desk. Sure do miss Bob. 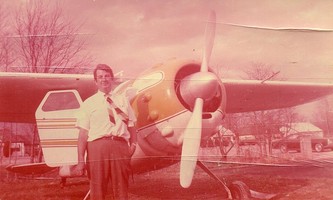 Dr. Kindel and his 195. Doc was a really good friend of my dads and it really affected him when doc was lost. I can remember as a kid they would hold my hands down on the work bench and Doc would burn my warts off with liquid nitrogen. I did'nt like going to work on those days. 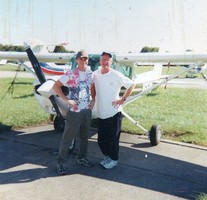 Bob Seviers- flight instructor, I think Bob was licensed to fly every aircraft made at one time.

A couple pics of an ercoupe at Blue Ash. The date was June of 1959. Maybe someone recognizes the airplane or the people? 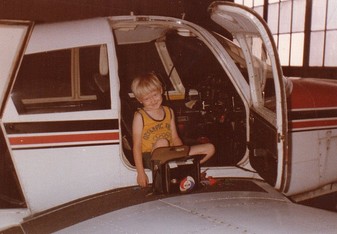 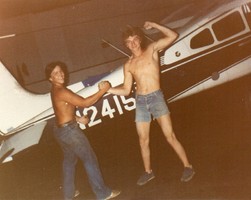 Ahh to be 14 again! One of my best friends, Danny Baugh got to work with me one summer. Danny is like 1/8th Cherokee indian, he was always that dark skinned. Standing in front of Doc Jett's Cessna 180. And yes we did actually work. Some serious washing and waxing was done back then. 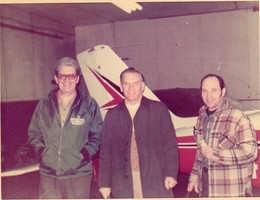 Don Browning, Dr. Burns & my dad. Mr. Browning was the AC rep for the area. He gave me my first airplane ride. I always thought he looked like the Joker in the old Batman TV show. He once told of while he was on a Battleship in the war that he fell asleep with his mouth open while on the top deck and got sunburn on the roof of his mouth. He and his wife were great friends of the family. Dr. Burns was a veterinarian down in Evendale. Just recently I stopped by Joannes fabric in evendale and as the lady was cutting my fabric, she glanced up and noticed my t-shirt. She says "thats a P-38 Lightning, my husband used to fly those during WW2".

I inform her that I work up at the airport. She says her husband used to own an airplane there. I asked his name and dang if it was'nt Doc's wife. After that I really quizzed her. Turns out Doc flew the all black night recon version of the lightning with no armament. How cool can it get. If I would have known that when I was a kid, I probably wouldn't have left him alone.

Not sure where to start with this picture. This Baron was co-owned by Harris True and Dick Keller. I really wish I had a picture of each of them. To me both are huge to the history of Blue Ash airport and aviation. Not only being long time friends of my father, they have to be a couple of the first Neutrons. Both worked for GE when calculations were done on chalkboards. I'm pretty sure Harris was a crew chief for P-47 thunderbolts. Also I think he had every aircraft rating known. We lost Harris this past year. No one even knew it til it was over. It's really a shame because he deserved an aviation send off. You just never know the story of people. Dick Keller was very quiet. A really dry sense of humor. He was just another aircraft owner as far as everyone was concerned. For me that changed in the early nineties. Someone at the airport found out that Dick was an SR-71 pilot, actually a test pilot. At the time I was finishing my basement and was kind of doing an aviation theme. One day I brought in a poster of an SR-71 and cornered Dick to autograph it for me. He signed it Col. Dick Keller, then put a little x in front of the colonel part signifying he was not part of that anymore? I did not question that other than we laughed it off. We were joking around and I was trying to quiz him as much as I could. I jokingly mentioned that was all that technology they gathered from the Roswell crash which made it possible. I figured it would illicit a laugh or some kind of response. What I did not expect was the stone faced silence with no response whatsoever. Almost uncomfortable. I will just leave it at that. You draw your own conclusions. Anyways, I asked him if he could remember what his unit patch looked like thinking I could find it online. He said to give him a couple days. Well he brought me one of his original patches! It says 1-May-1965, Testforce, 81000ft., 3+. Really!? So I was 3 months old and Dick was at 81,000 ft doing Mach 3+. That just blows me away. I seriously have to find a picture of these guys. 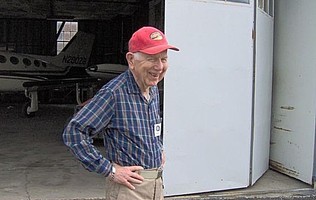 Harris and his N3N that he built. 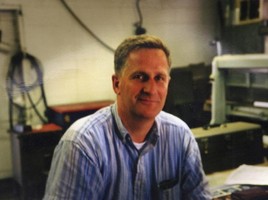 Many of you probably knew Joe Hogan. His family is probably one of the oldest aviation families around the area. They pretty much were Hamilton airport. I probably should have put this in the Blue Ash Aircraft heading. After my dad got out of aviation school, he went to Hamilton first looking for a job. Upon entering the back shop at Hamilton he met Bernie Hogan and inquired about a possible job opening. Bernie was the one that told him about a little airport in Blue Ash. My father really had a lot of respect for the Hogans. Anyways Joe was one of the gang at Blue Ash. Pilot, Mechanic, friend, airport bum like the rest of us. It was nice to have him around to get a second opinion on anything mechanical, especially if it was an older fabric airplane. Unfortunatley we lost Joe this past year. He is now laying fabric on angels wings. 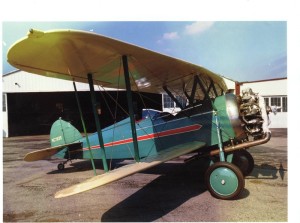 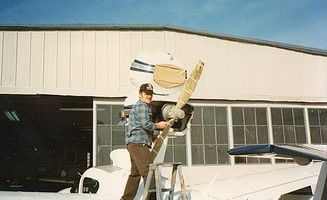 My dad installing a prop on Dr. Hillards Amphibian. Doc was one cool guy. Both his legs were busted up during the war so his wife did most of the flying. He was with the 98th combat brigade in WW2 and being a Psychiatrist was always trying to get my dad to open up about his experiences during the war. So when he came by I was always close by trying to hear otherwise we would never know anything. Doc was the one that landed in the Ohio river, struck a log and the aircraft sank. He and his wife had to swim to shore. He replaced that airplane with a 337, talk about out of the fat and into the fire.