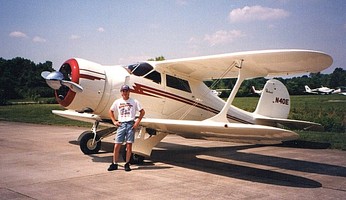 When we moved to Warren County in August 2012, I made up some quick business cards on my computer at home. I went online to search for airplane pics to use and ran across a picture of a nice staggerwing in Flight. I didn't think anything of it until I was recently going through a bunch of old pictures looking for any aircraft pics of Blue Ash when I ran across this one of me standing in front of the exact aircraft sitting on Execs ramp in 1997. Neat. 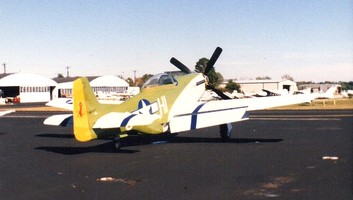 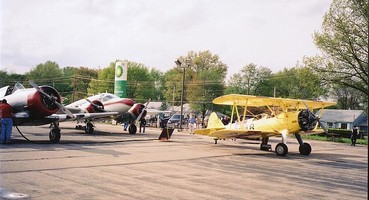 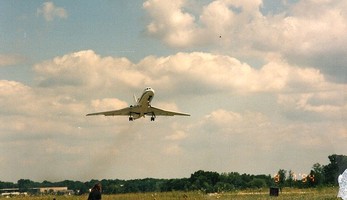 Apparently a falcon 50 is a big deal taking off in 3500 ft. so I had to go down with all the pilots and watch. Pretty sure thats Claudia at lower left. 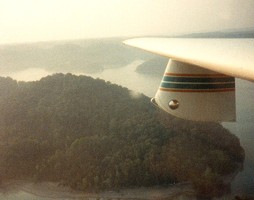 We were on vacation at Dale hollow in 86 and Bill Hensing gave us all rides in his lake amphibian. Very Cool. 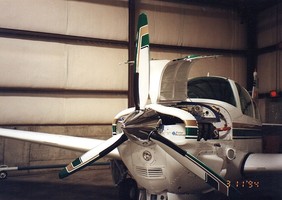 Tom Hinkleys Bonanza in Execs hangar. Hands down probably one of the nicest Bonanza's I've ever seen.

I had a bunch of friends who were always trying to get me into Amway (nothing against amway). One day Amways helicopter stopped by for fuel. From then on I would whip this picture out and show them where their money was going. not sure if you can see from the pic but the paint scheme was supposed to be the Grand canyon. It sure was pretty. Someone told me this is the one that crashed in lake michigan. 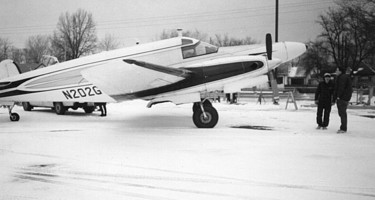 Cold evening with a Beech 18 turbine conversion. Thats Karl Glos and Pat Handley checking it out. 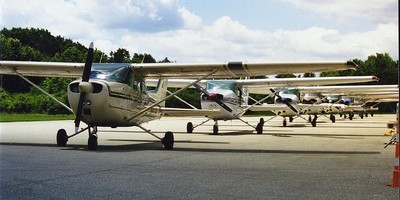 Don took this neat picture of all the 172's lined up waiting to give rides during one of the airshows. 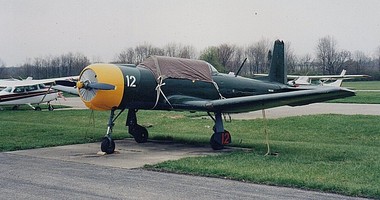 Mike Manley's Yak. Some of the guys gave him grief for buying a Yak. I thought it was pretty cool. 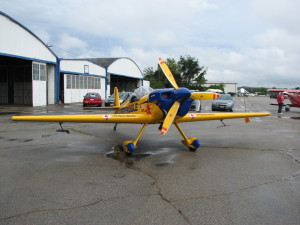 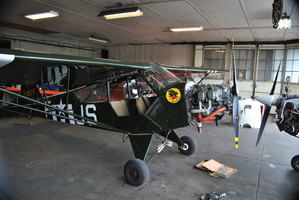 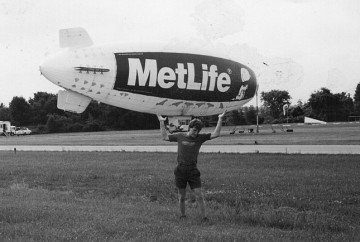 This picture was taken by Steve Hamm in probably the early 90s. Steve worked for Moose at Co-op as a line guy during the day and did all types of photography as his normal job. Steve was a super cool person and always fun to be around. Unfortunatley we lost Steve suddenly during that time period. We sure were a depressed bunch for a while. I'll try and find a pic of him and post along with this one. 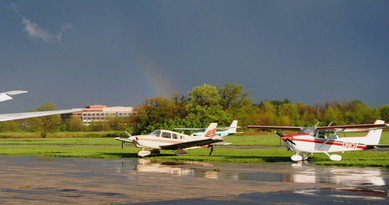 And all this time I thought there was gold at the end of the rainbow. Guess we are all wrong, it's Earl Helders Dakota.

Ok, I know the first thing everybody notices are the guns on that guy in the blue tanktop, also the hair and the earth shoes. Anyways, this is a trip we took to Nashville  a long time ago with Vic Cardis. He had a Debonair at Blue Ash for a long time.He was a super great friend of my dads and definitley one of highlights of the day when he stopped by the airport. When we saw his Cadillac drive up we knew the day was turning around. He and his wife were serious musicians. On this day he was playing with Jimmy Martin at the Grand Old Oprey and we were back stage! I,ve got a picture of Bill Monroe holding my brother Phil. Vic was Hungarian and no girls were safe when he was around. That aircraft is a Lodestar owned by Mike Devanney. we were riding in style. I'll never forget the thunderstorm we flew through on the way back to Blue Ash the next day. 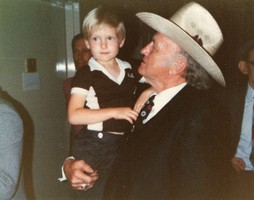